KHHsubs is a fan translation group which focuses on the Ryu ga Gotoku (Yakuza) series.

"KHHsubs" is short for "KameiHameHa Fansubs" - the name came from the "KameHameHa" technique used in Dragonball Z, but with "Kamei" (name of the former Hello! Project idol, "Kamei Eri") instead of just "Kame". 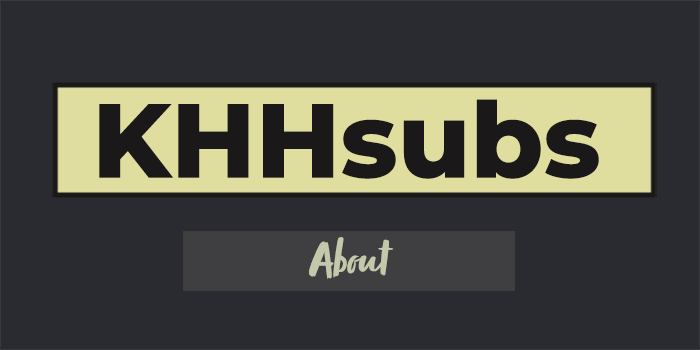 KHHsubs (KameiHameHa Fansubs) was founded by Mark (Erika2113) in 2009 when he wanted to sub the Hello! Project song "Kataomoi no Owari ni". Krv helped him out a little with it and it was uploaded on Mark's own YouTube channel. Thereafter, Krv translated the song "Jounetsu no Kiss wo Hitotsu" and Mark did the timing and typesetting for it and uploaded it to his YouTube channel. Krv then did a translation for another song called "It's You", which was then checked over by Captain Epic (his first involvement with KHHsubs) and then Mark did the timing and typesetting and uploaded it to his channel. This was Mark's last involvement with a KHHsubs release.

In January 2010, Captain Epic decided to start translating the cutscenes from Ryu ga Gotoku Kenzan, with Krv doing quality checking. Mark said it could be released under KHHsubs, marking the end of Hello! Project only releases, and a new YouTube channel was created by Captain Epic for future KHHsubs releases. At the same time, Krv had translated some other songs but due to Mark having problems with his computer they were not released. Later in the year, a new song translation was released - "Tabidachi no Uta", which was translated by Krv and the timing and typesetting was done by Captain Epic. In mid-2010, Captain Epic started recording the cutscenes from Ryu ga Gotoku Kenzan in HD and re-uploading onto youtube (originally, he was working with VERY low quality rips from videos he found on YouTube). In late November 2010, Captain Epic had finished all the cutscenes from Ryu ga Gotoku Kenzan and then took a break from working on KHHsubs releases.

In January 2014, Captain Epic started uploading translations of the Ryu ga Gotoku 5 cutscenes (but because YouTube was still blocking the cutscenes, he created a KHHsubs Dailymotion account and started uploading there instead). Work on the Kenzan substories also continued. In February 2014, the khhsubs.com site was launched. Captain Epic began work on the Ishin Walkthrough in March 2014. In November 2014, KHHsubs joined up with a team to begin working on a translation patch for Ryu ga Gotoku Kurohyou on the PSP. In December 2014, The Ryu ga Gotoku 5 cutscenes were taken down from Dailymotion because of the announcement of the English version of Yakuza 5.

After the official announcement of an English release of Zero, KHHsubs stopped working on the project. At the same time, work on the Kurohyou translation came to a halt. In 2016, KHHsubs starting working on an English video walkthrough for Ishin like he did with Kenzan.

In 2018, KHHsubs began work on a Hokuto ga Gotoku English guide, while continuing to work on the Ishin cutscenes.

In 2019, KHHsubs finished the Ishin cutscenes. Also, the Hokuto project was abandoned due to the official English release.

In 2020, KHHsubs became involved with a group working on an Ishin English translation patch.

The site went down at the start of 2022. CaptainEpic3 used the downtime as an opportunity to re-work the site, making use of PHP and improving its compatibility with different devices (such as on smart phones and tablets). Eventually, the site was back up and running in November. Due to a lack of time to work on it, combined with the fact an English patch had already been released, KHHsubs decided to put the Kurohyou 2 project aside. Instead, the Kenzan guide project was launched, which now serves as KHH's main focus.