You can visit the blacksmith in Rakugai anytime after chapter 3 starts. When you get close to the building, Ryoma sees the blacksmith. The blacksmith tells him if a sword isn't regularly treated, it will go bad no matter how good the quality of the sword, and that he can't expect to get into the Shinsengumi with a bad sword! Ryoma asks how he knew about that and the man says samurai who walk down this way go to one of 2 places - Gion to the east, or the Shinsengumi to the west - and he says Ryoma doesn't look like the kind of guy who would go to Gion. The blacksmith invites Ryoma inside.

When inside, speak to the head blacksmith (in white) and he'll tell you about the blacksmith.

When the blacksmith reaches level 3, more materials appear in the materials shop.

When the blacksmith reaches level 5, more materials appear in the materials shop.

When the blacksmith reaches level 16, the number of gold icons on the tempering mini-game increases.

When you talk to the guy in the corner to the left when you enter the blacksmith (after talking to the head blacksmith), he gives you a bunch of equipment materials. You can now buy materials from him (see materials shop on shops page).

Speak to the blacksmith and select the top option, then the top option again to create a new weapon/armour. You can press L1/R1 to switch between the weapon/armour types. Then you have a list of weapons/armour you currently. Select one of your weapons and then you have a list of weapons you can create when using that weapon as a base, including the materials you need for that weapon (and how much money you need). 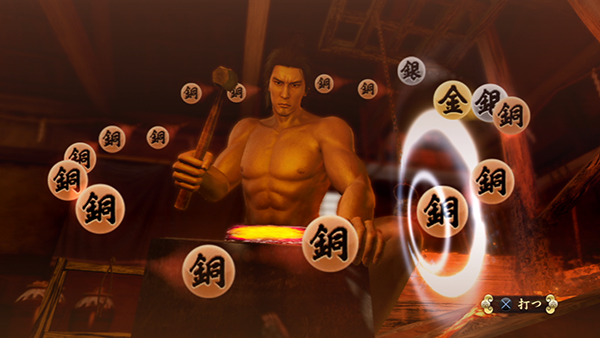 For status increasing, you only need a hammer. Which hammer you need depends on the status grade:

(even though they call them "sharp swords", the grades apply to all equipment, not just swords) 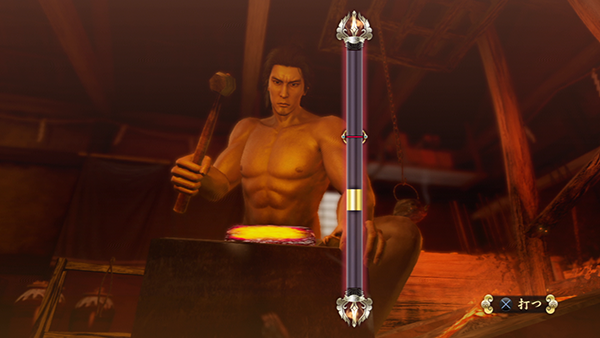 To synthesise, your base weapon/armour needs to have an "empty" symbol. See the picture below: 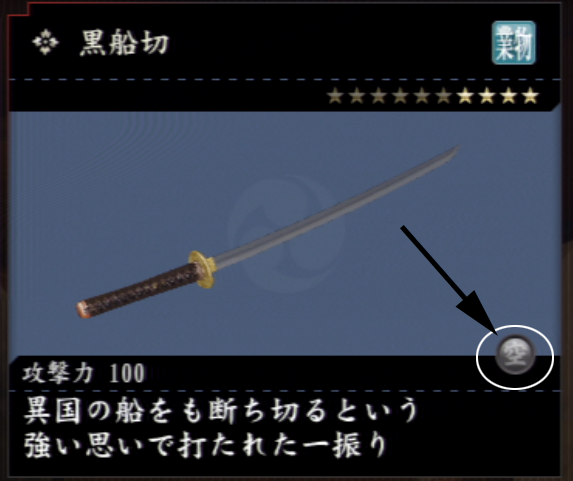 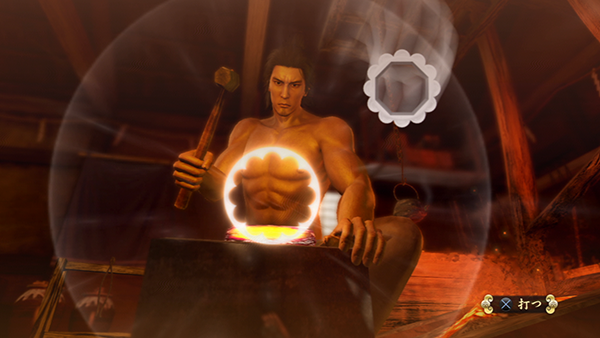 To synthesise, keep pressing Circle (or X on European consoles) to stop the object when it gets to the centre.

Speak to the blacksmith and select the top option, then the third option to create a special bullets. Select a bullet type and the amount of bullets you want to create (10, 20 or 30) and it tells you on the right what materials you need. You don't have to do any mini-game for this one; just accept and they are created. You can only make Flaming Bullets at first, but you can make more after purchasing the ability to make more bullets in the Pistol sphere grid.