Go to Yamabuki in Gion to hang out with Konno Anna, the courtesan in Ryu ga Gotoku Ishin. It costs you 1 Ryo per visit.

The system works completely different to the previous games: The multiple choice responses make no difference. There's no "hearts" of "affection gauge" or anything. You also don't even order drinks or food like you did in previous games. The main focus of the courtesan system this time is on mini-games you can play with her. Keep visiting her to build the friendship gauge. 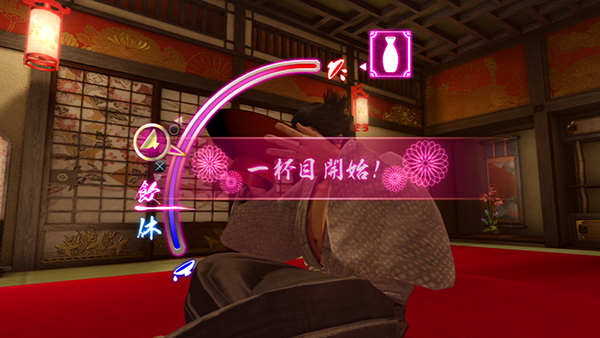 This mini-game is simple - don't let the cup get too high and don't let it get too low (for those of you who played the main series games, it's basically the same as the massage parlour system). Repeatedly press circle to raise and repeatedly press X to lower. The higher up on the gauge you are, the quicker Ryoma drinks. When Ryoma starts getting drunk (will indicate on the screen), you need to lower it down to below the line near the bottom to help reduce the intoxication. 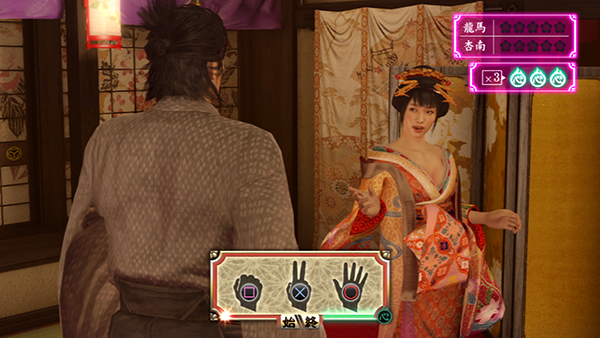 Simply press either square, circle or X for rock, paper or scissors before time runs out. You can press triangle to use "Mind's Eye", which slows things down, letting you see what she choses, making it easier to win.

So long as there is time remaining, you can change your selection. You can cheat if you want by pressing the Playstation button near the end, just as the two of you are about to put out your hands, so you can see what she has chosen and switch to the one that beats it (works like "mind's eye" but instead of slowing down it completely pauses it, but you're not supposed to do it - like I said this is cheating, but if you don't mind doing that then it's easy to win) 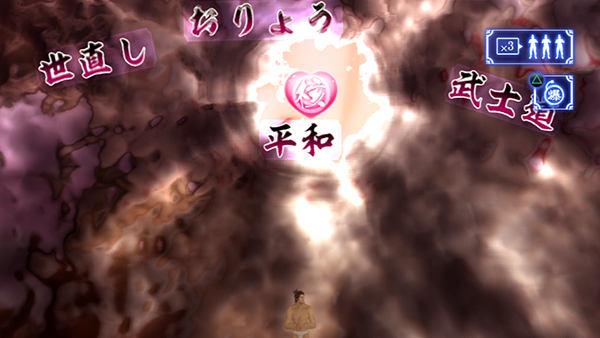 You control Ryoma at the bottom of the screen and can only go left and right. The objective is to destroy 3 of those flying heart things (they take quite a lot of hits to destroy). You cannot let the falling text touch you or you lose a life. You can shoot the text with square and you can use your bomb (destroys all text on the screen) with triangle. You can also hold down the square button to unleash a powerful shot.

After completing all 3 mini-games, you get the "Ascend to the Heavens Like a Dragon" trophy. Also, next time you go in to spend time with her you get several options:

When selecting a game, you get a choice of 3 difficulties, with the top being easiest and bottom being hardest.

Nothing special happens as you build up the friendship gauge; you just keep playing with her and it will eventually max out.