Bandits' Cave || Thieves' Mine || Remnants of the House of Toyotomi

When you speak to the receptionist, select the top option to go to the battle dungeon screen. 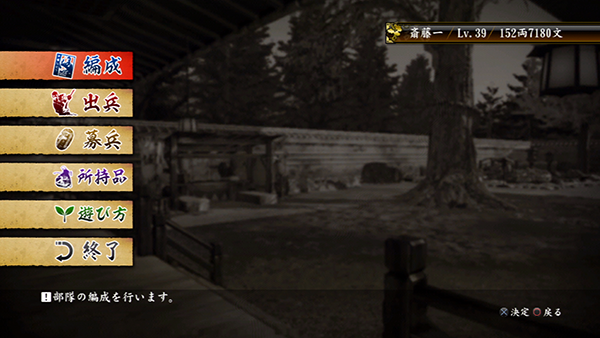 Select the top option to organise your squads

Select the second option to fight in the battle dungeon

Select the third option to pay to recruit new soldiers (buy new soldier cards) - the more money you spend, the more likely you are to obtain rarer cards

Select the fourth option to use your item storage system

The bottom option exits out of the battle dungeon screen

When in squad organisation, the first slot of a squad is the corporal slot. The rest of the slots are regular soldier slots. When you select an empty slot, choose the first option to insert a card.

When you select a slot which already has a card, choose the first option to swap it with another card. Choose the second option to use the "synthesise" option - you can synthesise cards to increase the experience of the base card. Of course, you lose the cards you used to synthesise with the base card after doing this.

Choose the third option to use "rebirth" - you can only do this with a card that has reached its max level. Different cards require a different weapon to use rebirth. After using this, the card's level goes back to 1 and you can level it up again to increase the health and ability gauge refil speed even further.

Choose the fourth option to remove the card from the squad.

Please check out the Soldier Card page for details on the cards, as well as lists of the cards themselves and their abilities.